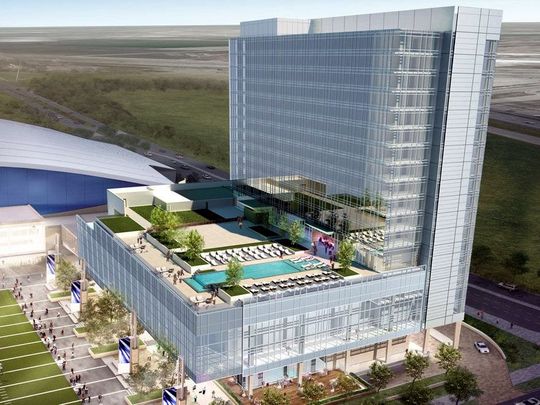 Who: The plan is proposed by the Coachella Sports and Entertainment Stadium Authority, a group founded by J. David Miller the founder and coach of the SoCal Coyotes football team.

What: A $300 million, 12,000-seat indoor stadium and sports complex which includes a hotel, medical facilities, retail and senior-living opportunities

Where: The vacant land in Thousand Palms between the Classic Club golf course and Interstate 10.

Why: The goal is to be part of the booming youth sports industry, hosting camps, tournaments, and the like, while also being a venue for the SoCal Coyotes and perhaps a pro soccer team. Local high schools would be able to use the facilities as well.

Plan for 12,000-seat indoor stadium and sports complex in Thousand Palms in place

A 12,000 seat indoor stadium is in the works and would be located in Thousand Palms. Palak Barmaiya/The Desert Sun

David Miller, the founder and coach of the SoCal Coyotes developmental football team in the desert, launched the Coachella Sports and Entertainment Stadium Authority (CSESA) with the goal of creating this sprawling facility.

The proposed sports complex would include a hotel, medical facilities, a senior living village and retail and be located on 125 acres of land owned by the H.N. and Frances C. Berger Foundation in the area between The Classic Club golf course and Interstate 10.

It will be called The Shield at 1Coyote Way, and its primary focus will be to offer a place to allow the desert to be a player in the $15.3 billion youth sports industry, hosting camps, conferences, tournaments and championship games, etc.

“If this goes through as planned – and it’s no longer just a plan – the entire community will benefit for years to come,” said Miller, whose group will make the official announcement of the project during the first Coachella Valley Sports Tourism Summit on Thursday morning at Fantasy Springs Resort. “It had to be a perfect storm, a perfect vortex.  There had to be the perfect demand for sports tourism, the perfect growth of the valley, the perfect economic conditions for the valley and even the right politicians in office both Democrat and Republican. It all came together.”

And Miller has brought in a team that he believes will help make this vision a reality.

More: A new indoor sports arena in the desert? Here are 10 ways it could be put to use

The land where The Shield will be built is owned by the Berger Foundation, and they’ve agreed to sell it to Richmond Honan Development and Acquisitions LLC, a firm based out of Alpharetta, Georgia, whose primary efforts to this point during their 42-year history have been building sprawling hospital complexes.

The Berger Foundation, which, according to its website supports organizations who promote health care, social services and education in an effort to help people help themselves, has been wanting to do something big with this plot of land for years but never found the right project until Miller and his group came around.

According to Doug Vance, vice president of Real Estate at the Berger Foundation, when they purchased the land in 2003 the original idea was to build a university on it, but that did not pan out.

“There’s been many other potential investors that have come along over the years and nothing ever seemed to exactly fit,” Vance said. “But when Coach Miller brought The Shield concept to the Berger Foundation with all the charitable things he does for the children here in the Coachella Valley, we were very interested and then when we looked into Richmond Honan as a developer they also had the same goals and interests that we do to help the community.”

Vance said that he could not disclose the details of the purchase price at this time, but did indicate that the Berger Foundation is trying to “help out on a financial basis by discounting the land to make it truly come to fruition.”

The proposed site for a large sports complex on Wednesday, July 18, 2018 in Palm Desert.

According to Miller’s proposal, The Shield will be completed in 2021 and will feature a 12,000-seat air-conditioned indoor stadium, a 120-room hotel, medical and senior living facilities and also be the home to the SoCal Coyotes football team. In addition, discussions are in place to bring a pro soccer team to the facility.

The East Valley Coalition including Riverside County Supervisor V. Manuel Perez commissioned CSESA to study sports tourism in the Coachella Valley.  Miller and his team learned about and visited similar facilities that already exist and are doing well across the country.

A campus called The Star in Frisco, Texas, which partly houses the Dallas Cowboys headquarters was used as a model, but a better comparison to the desert might be the Grand Park Sports Campus that was completed in 2015 in Westfield, Indiana. And it’s a success story.

The population of the town (around 850,000) and the site (a little town surrounded by agriculture fields) are similar to the desert’s. The town of Westfield issued $70 million in bonds to build the campus, a 400-acre complex that opened in 2014 and includes 31 grass and synthetic fields for soccer, lacrosse and other field sports, 26 softball and baseball diamonds and a 370,000 square foot indoor facility. New hotels and retail outlets followed. According to the study, in 2016, Grand Park attracted 1.2 million visitors resulting in $145 million in tourism spending.

Curt Pesmen, part of the CSESA team as the national director, strategic media, became friends with Miller 20 years ago when they worked on the same magazine. Pesmen said that while every project of this magnitude finds stumbling blocks along the way, he is confident that The Shield can have a positive impact on the community similar to what they’ve seen in Westfield, Indiana, for example.

“A project of this size, and remember it’s not just a stadium, it’s a campus, is bound to have some bumps along the way, but early indications are that there is broad support for each piece of the puzzle in this case,” said Pesmen, who is with BoCo Media based out of Colorado. “I’m optimistic but realistic, and if and when some of those stumbling blocks occur, all the players in this case like Richmond Honan have all kinds of expertise and experience to get over some of those obstacles.”

The origin of his vision came when Miller’s developmental football team couldn’t find a place to play in the desert. They bounced around to different high school football fields like Palm Springs and Xavier Prep. They played in Anza, and they even played on a golf course one time at Desert Princess.

Miller decided that rather than complain about the situation he would try to do something about it. He started on a mission to create a place in the desert that could house everything from a pro sporting event, to youth clinics and also create a place for families to come and have fun with rock walls and eateries without spending much money.

The other driving force for this project, according to Miller, is God. Faith plays a large role in everything Miller does. The name Shield comes from a biblical passage Proverbs Chapter 30, verse 5 “Every word of God is flawless; he is a shield to those who take refuge in him.”

Miller said every step of the way he would pray about whether or not to continue.

“Whenever I thought to myself this is the end of it, it’s not going to happen, I would pray for a sign. I would say ‘God, if we’re not supposed to build this stadium, shut this down, shut the whole thing down, shut the Coyotes down. Shut it all down.’ And then Boom! A new door would open and the next piece to the puzzle would be there right in front of us,” Miller said. “And that happened again and again and again. You can not take God out of this equation and just write about a building. I mean, I guess you could, but it wouldn’t be the truth.”

In the past decade, developers have proposed – and sometimes built – large sports and entertainment complexes in the desert.

About seven years ago, a group of investors proposed building a racetrack on unincorporated land south of Jacqueline Cochran Regional Airport. When the project appeared to stall, couple Tim and Twanna Rogers bought the property instead. As of March, the pair had invested $150 million of their own money so far to build Thermal Club, a 344-acre private racetrack and housing development.

But other pitches for gleaming venues have not taken off.

In 2015, for example, real estate company Saxony Group proposed turning a former Sam’s Club site in La Quinta into a convention center capable of hosting a crowd of up to 10,300 people at a time, touting the property as the future home of music festivals and parties. The plan never advanced, and the old Sam’s Club recently sold after sitting vacant for eight years.

How confident is this group in this case?

“I want to say 100 percent, but you can never really say that,” Vance said. “But this Shield proposal is the best I’ve seen in my years with the foundation (since 1990) and I’m confident with the team and partners that Coach Miller has.

“We’ve done a lot of analysis on these people. We know they’re for real. We know they have the lord on their side. This is a marriage with a non-profit and someone that wants to do good in the community and for the children and I believe it will work and we’ll make sure it works. They have our full support throughout the development of the project.”